In most industries, the economic downturn and the strong Swiss franc have affected small and medium-sized enterprises (SME) less than large companies. Nonetheless, SMEs will no longer be able to dodge the negative momentum in the third quarter. UBS WMR anticipates that economic growth in Switzerland will contract from 1.7 percent this year to 0.4 percent in the coming year due to the difficult economic environment.

According to the UBS quarterly survey of over 500 companies, the momentum among SMEs in the manufacturing sector has slowed or even declined for all indicators. Only the number of employees increased slightly during the third quarter. Both large companies as well as SMEs could stabilize sales in the third quarter, but already anticipate that these will drop in the final quarter. All companies reported a deterioration of sales prices, earnings and cash flow in the third quarter, while the decline was less pronounced among SMEs than it was among large companies.

The service sector is suffering less than the industrial sector in the current economic environment. Sales, earnings and cash flows thus remained unchanged during the third quarter, while employment even rose again slightly. However, the situation varied depending on company size. While large companies were able to increase employment to a greater extent than SMEs, the latter were less affected by falling sales prices.

The retail and tourism sectors are both struggling, irrespective of company size. In the retail sector, only the employment level among SMEs remained stable in the quarter, while all other indicators deteriorated for both SMEs and large companies. Compared to large companies, however, SMEs fared better. The same could be observed in the tourism industry: Sales, prices, earnings and cash flows deteriorated less rapidly for SMEs than for large companies.

Equilibrium rate of the Swiss franc

The Schweizerische Gewerbeverband sgv (sgv – Swiss Industry and Trade Association) is the umbrella organization for small and medium-sized enterprises. It was founded in 1879 and is now the largest business association in Switzerland. The sgv represents the interests of some 300,000 small and medium-sized enterprises. Most of these companies are members of approximately 255 industry and professional associations and of cantonal industry and trade associations, which are organized on a multi-sector basis.

Methodology of the UBS SME barometer

The UBS SME barometer is based on an evaluation of the UBS survey of the industrial sector that the bank has carried out since 1975. This survey was extended to include service providers in the third quarter of 2006. Around 1,300 companies (1,000 SMEs and 300 large companies), forming a representative cross-section of the Swiss economy, are contacted every quarter. Companies with fewer than 250 employees are classed as SMEs. Survey responses are evaluated using a diffusion index: the result represents the weighted average of the percentages of companies reporting a very positive, positive, negative or very negative trend. It therefore does not represent a percentage rate of change. 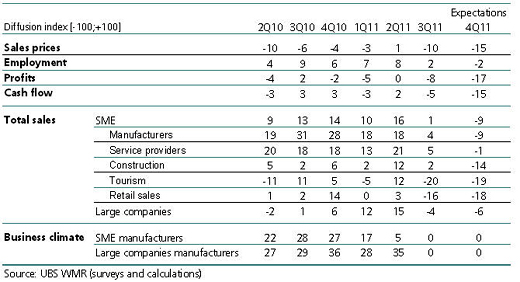 The business climate is calculated on the basis of the survey results for output, incoming orders and revenue in the manufacturing sector. Data on cash flow and on an industry-specific level have been collected since the first quarter of 2009. 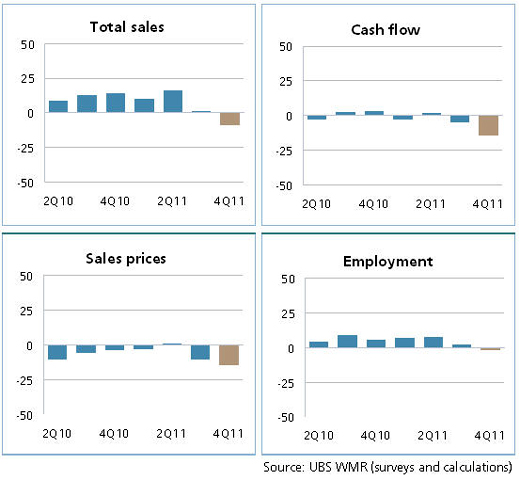